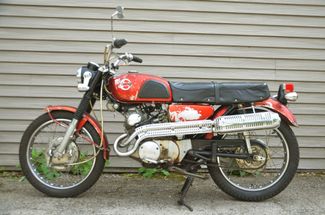 This cycle was painted red for a Christmas promotion in 1968 by the original selling dealer. While this isn't a factory color, it is original in the sense that it came this way day-one. The cycle was purchased by the father of the original owner as a Christmas present for that year. We obtained the cycle from the nephew of that original owner; health concerns resulted in a number of his cycles coming up for sale (we also have a CB100 purchased from the same family).

This is an incredibly original example of a CL160 Scrambler; this is not a kit cycle built up after purchase, but it bears CL numbers on frame & engine.

Take a close look over the subtle details to see that much of the cycle remains in fantastic condition and is very correct. The inside of the fuel tank looks quite nice; not spotless, but certainly a viable fuel vessel without need of treatment to be put into use.

We have confirmed good compression and spark, but have not gotten around to a reconditioning of the cycle. Should it not sell in this condition, we will be sprucing it up for sale in spring.